This entry was posted on 5th August 2016 by Direct UK Deals. 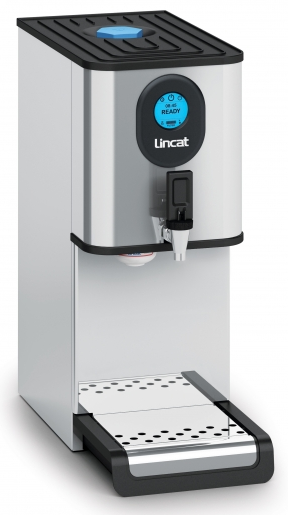 The hugely popular Lincat range of water boilers has been given a massive overhaul. Along with sleeker aesthetics, the new Lincat range boasts improved technical design, added features and an improved user friendly interface. 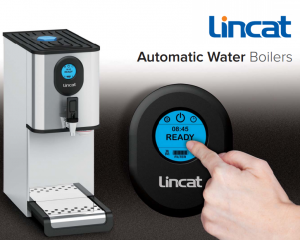 Firstly, the new Lincat range have larger, more advanced touch screens. From these users can easily navigate the menus, whether that’s to set a timer, the temperature, or put the water boiler into the new Eco mode. This causes the water boiler to half its output for times when demand is low, saving energy and money. The new Eco mode can also learn when the quieter periods are, and automatically reduces the amount of water it is boiling. Aside from the Eco mode, the new Lincat range have an improved 7-day timer built in, meaning you can program the unit to switch off overnight, or for the whole weekend if desired.

As users may know, any water boiler will struggle with lime scale if not treated correctly. In turn this causes the water boiler to be less efficient, which in commercial areas is not ideal. The new Lincat range of water boilers include a screw cap at the top which is joined to an indicator probe to allow users to monitor the build-up of lime scale. Once descaling is required, the on screen instructions provided by the Lincat water boiler will remove the need for calling in an engineer, saving money and time.

If one of the Lincat water boilers breaks down, the unit can self-diagnose the problem, and tells users exactly what to say to an engineer over the phone so the correct parts can be brought along to repair it on the first visit.

Other than the new Lincat range having vast improvements, there is also a new addition coming soon to the range. This is the Lincat EB3FX/HC. It is a twin tap model that can dispense hot and cold water, increasing the versatility of the already popular EB3F(X) model.

Click here to go directly to the Lincat range of water boilers.