This entry was posted on 27th December 2019 by Direct UK Deals. 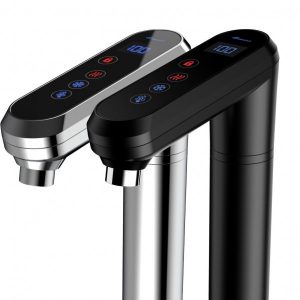 We at Electrical Deals Direct understand that making sure your customers, staff and office visitors have access to instant boiling water for their hot drinks has become a very important issue for more and more companies: so what is the choice of supplier and product when it comes to commercial boiling water taps?

Firstly, it is important to emphasise that although there are many instant boiling water taps available for domestic use, the chances are that for the type of levels of usage you will make of them in an office environment, these domestic models will not be man enough for the job. In fact, the main supplier, Zip, has separate models for the home and office environments, and will not honour warranty claims if products have been used in the ‘wrong’ environment.

The fact is that in the office, where time = money, you cannot afford to have people waiting around too long in periods of heavy usage. So capacity, speed of heating and robustness are extremely important: if you use a unit which does not deliver these, you might as well stick with your kettle (and if you are unsure as to whether having one of these in the office will actually save money, have a read through this article which explains it).

If you are not particularly worried about what it looks like, then you may want to consider an ‘over sink’ or ‘on-counter’ option, but if you are after something which will both look good on the sink or worktop, and have a highly efficient unit hidden away in a cupboard under the sink, then read on.

If you are looking for a tap (either over the sink or on a separate ‘font’) with an under-sink tank rather than an oversink unit, and would like the option of the unit also dispensing chilled water, then there are currently at least 5 serious options to consider: 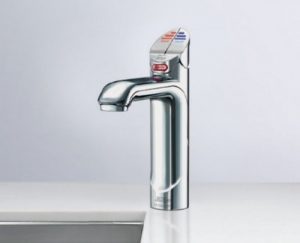 Zip are the market leader in this type of tap. Without any question their equipment is extremely high quality, and has been tried and tested in tens of thousands of the biggest companies in the world.

The commercial range starts with the BC100/75G4 (HT1764UK) which dispenses 100 cups of boiling water per hour and 60 glasses of chilled water per hour) This is the most popular model in the range. The range extends up to the BC240/175G4 (HT1705UK) which is capable of240 cups of boiling water and 175 glasses of chilled per hour. There are also versions that also offer sparkling water.

To get an idea of prices and different options in the range, have a look through the information here.

Billi have been quietly building an excellent reputation in the market for the well thought out range of boiling and chilled (and sparkling) taps. The build quality and service levels are second to none, and they give both Zip and Heatrae Sadia a good run for their money. Interestingly, they do not have a boiling-only option, but instead start with a boiling and ambient model. The most popular model is the Billi Compact XL 20 - catering for up to 20 people in an office. Please look here for further information about Billi taps. 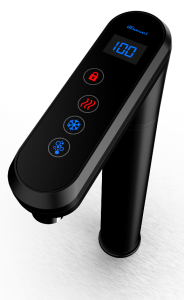 As detailed in another of our articles, Illimani taps have some great features that other suppliers don’t offer, including an unrivalled purification and filtration process that totally eliminates limescale issues, touch-screen technology and a twin tank system capable of dispensing far higher volumes than all the competition.

All these stylish taps are available in either polished chrome or satin black, and each variant comes in either ‘standard’ capacity (which is very high!) or ‘ultra-high’ capacity for exceptionally high demand environments.

All in all, it is quite clear that the Illimani range of boiling water taps offer a great deal more than rival products.

From the leading name in filtration, the Brita Vivreau range of commercial boiling taps are gaining considerable market share in the office environment.

In terms of build quality, reliability and value for money, there is no doubt at all that these are up there with the best, although they are not as widely known as the most popular brand in this sector.

The version of these sold in the highest numbers would be the ViTap 304, boiling and chilled.

There are a number of great features that come as standard with the Vivreau taps. We’ve written an article covering these in more depth. You can read it here. 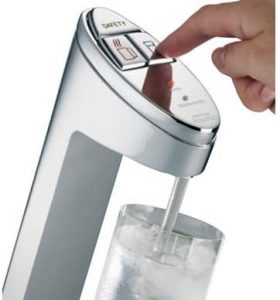 Finally, there is the Aquatap from Heatrae Sadia. It has a number of interesting features which make it worth serious consideration. Heatrae Sadia have an excellent reputation in all types of water heating products, but the Aquatap is its first product into the top-end commercial market for this type of product.

The first stand-out feature is that it has a much larger storage tank – 5 litres compared with the 1.8 litres of the Zip. Secondly, it has an in-built electrical scale reduction solution, rather than relying on external, replaceable filters. And thirdly, it is extremely price competitive with the Zip – the exact level of this varies with the model and options chosen.

Like the HydroTap, the Aquatap is available as a boiling-only solution, boiling and ambient, or boiling and chilled.

So the really great news about all of this is that there is not so much choice that it becomes a complicated exercise, but that there is now some worthy competition for Zip. This will help make sure things stay competitive in terms of both price and features.

If you need any advice on choosing the right boiling or chilled water solution for your office, please don’t hesitate to call us on 01934 253600, or chat to one of our boiling tap geeks on the online chat facility on our site.